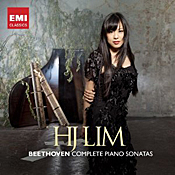 Beethoven so enjoyed piano sonatas, he wrote thirty-two of
them between 1795 and 1822. While he probably didn’t intend them as a single
cycle with any unifying subject matter, pianists ever since have been playing
them in conjunction with other pieces in the series, sometimes presenting all
thirty-two of them over a succession of nights. Then, with the coming of the
sound-recording age, pianists clamored to prove their worth by releasing
complete recorded sets. I confess I have heard in its entirety only one of the
dozens of such sets currently available, that of Alfred Brendel (Philips), but
I have other discs of select sonatas from the sets of Wilhelm Kempff (DG),
Arthur Rubinstein (RCA), Sviatoslav Richter (EMI), Emil Giles (DG), Stephen
Kovacevich (EMI), Vladimir Ashkenazy (Decca), Claudio Arrau (Philips), John
O’Conor (Telarc), Maurizio Pollini (DG), Murray Perahia (Sony), and Vladimir
Horowitz (RCA). And, of course, there are what seem like hundreds of other
single and multi-disc collections of the sonatas available, so choice is almost
endless.

In 2009 Korean pianist HJ Lim burst onto the musical scene
with a popular YouTube video of a Rachmaninov and Chopin recital she had done,
followed by an appearance in Paris where she performed the complete Beethoven
sonatas. These events so inspired the folks at EMI Classics, they signed her to
record the sonatas in the set we have here. There is little question about
EMI’s excitement: Ms. Lim’s playing is wonderfully virtuosic, her performances
remarkably intelligent, if highly idiosyncratic, and her personal appearance
strikingly photogenic. It’s a winning combination for any performer.

Let’s begin our look at the set by noting how Ms. Lim and
EMI have chosen to present it. First, they have laid out the sonatas over eight
discs, four two-disc packages, each package I presume EMI to make available
separately as well as in the complete box. Second, she has opted to record only
thirty of the thirty-two sonatas, omitting Nos. 19 and 20, which Beethoven
wrote for family, friends, and students and whose publication he suppressed.
Fair enough. Third, she has organized the sonatas not chronologically but
according to a personal thematic arrangement. Thus, you will find various of
the most-popular works sprinkled in amongst less-familiar pieces. This has the
advantage for the listener of spicing up the content with variety and the
advantage for EMI of ensuring that if you’re buying the two-disc packages
separately, you’ll probably have to buy several of them in order to get
everything you want. Yes, marketing is always a factor in these things.

The first disc in the set tells us a great deal about the
direction Ms. Lim will be taking in the whole cycle in terms of approach,
survey, and sound. She starts by including three sonatas-- No. 29 “Hammerklavier,” No. 11,
and No. 26 “Les Adieux”--under the
thematic heading “Heroic Ideals.” In her extensive booklet notes, the pianist
explains her intensions by saying something to the effect that Beethoven had a
special relationship with his Creator, a relationship he tried to communicate
in his music. She continues by referring to the myth of Prometheus, the demigod
giver of arts and fire to mortals; to Beethoven’s temporary admiration for
Napoleon; and to the composer’s increasing deafness. While her critical
analysis of the composer’s life and her own individual reflections appear weighty,
much of it also seems rather dry and academic, ultimately providing less
insight into Beethoven’s motivations than they might seem. Likewise, Ms. Lim
spends three lengthy paragraphs on the composer’s metronome markings, saying on
the one hand that he was pretty definite about things but finally concluding
that the markings probably don’t matter as much as the pianist’s having “the
right feeling.” If it all begins to seem rather highfalutin and vague at the
same time, it probably is. I’d advise just listening to the music and ignoring
much of the categorizing and composer examination.

Ms. Lim begins with the “Hammerklavier,” that most brawny,
lengthy, and difficult of all the sonatas. You’ve got to give her credit for
starting right in with the heavy lifting and getting the show going with a
rousing opening act. She attacks the Hammerklavier” with vigor and passion,
demonstrating both a scholarly and dazzling command of the piano that will
serve her well throughout the cycle. If I have any minor reservation about the
performance, it is the same as I have about all of her work: namely, that she
appears to have a youthful enthusiasm that leads her into very fast finger work
in the outer movements and sometimes less than penetrating interpretations of
the slower sections. She is blazing, to be sure, but a quick, simple comparison
to someone like Alfred Brendel indicates she still isn’t as mature or
understanding as she may be in a few more years. Although No. 26 is a little more traditional and Ms. Lim’s speeds a bit more
conventional, she still doesn’t let much or any sentimentality show through in
her reading, which can be both radiantly fulfilling and frustratingly severe.

The first disc also tells us everything we will need to
know about the sound. EMI recorded Ms. Lim playing a Yamaha CRS piano in Faller
Hall, La Chaux-de-Fonds, Switzerland, in 2011. The result is one of the
cleanest, clearest piano recordings you’ll find, with excellent transparency
and taut transient response. The venue is modestly resonant, and the piano
shows up warmly and richly most of the time, with only a few instances of cold
or hard sound. Since the clarity corresponds well to Ms. Lim’s analytical
approach to the music, it’s undoubtedly a good fit, and I have no complaints. I
found it extremely easy to listen to.

Disc two finds five sonatas categorized under the heading
“Eternal Feminine -Youth.” Now, I don’t know about you, but I’ve never really
thought about Beethoven in terms of “eternal feminine.” Still, I suppose Ms.
Lim’s characterizations of Sonatas Nos. 4,
9, 10, 13, and 14 “Moonlight” do,
in a way, fit that description. The music is of a sweeter, gentler nature than
most of the other sonatas, Beethoven as the true romanticist, the passionate
yet wounded lover. The “however” is that Ms. Lim plays them with almost the
same dispassionate precision she applies to the “Heroic Ideals” group. As an
example, she zips through the famous opening Adagio of the “Moonlight” lickety-split. For comparison, both
Brendel and Kempf take a little over six minutes to complete the movement; Ms.
Lim takes about four and a half minutes, a full twenty-five percent faster.
It’s not that her playing doesn’t come highly charged with emotion; it’s that
it doesn’t necessarily convey much in the way of tragic or romantic feeling. 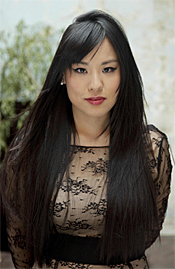 Disc three begins the next volume, and it contains
Beethoven’s three earliest sonatas, Nos.
1, 2, and 3, under the heading “Assertion of an Inflexible Personality.” The
“personality” is that of Beethoven, and Ms. Lim explains in the booklet that
the young composer was typically confronting fate through a youthful
rebelliousness. Perhaps it’s Ms. Lim’s own youthful rebelliousness that’s at
issue here; I don’t know. In any case, listeners may recognize the opening Allegro of No. 1 from its use accompanying countless silent movies, and Ms.
Lim seems to have a good time playing up its extensive melodrama. Nonetheless,
I rather enjoyed its minor rebellion, too. Likewise, she provides a youthful
exuberance in the other two sonatas.

Something like the dramatic innocence of the first three
sonatas, the fourth disc finds four sonatas in the category of “Nature”: No. 15 “Pastorale,” No. 21 “Waldstein,” No. 22,
and No. 25. In these works, Beethoven
follows a course characteristic of the newly flowering Romantic Age in
describing the universal appeal and dramatic innocence of the natural world.
Here, we find Ms. Lim in extraordinarily good form. Her “Pastorale” is
especially welcome, a genuinely ardent, expressive, descriptive view of Earth’s
wondrous landscapes. If I have any minor reservation, it’s that her playing is
so dextrous and precise that it almost seems as though at times she’s showing
off. Her rather fast, heady plunge through the “Waldstein,” for example,
appears more intellectual than it does insightful, more engaged in technique
than it is a revelation of the soul. Still, with piano playing so
scintillating, it’s hard to argue with the results. Again, EMI’s recording is
clear and strong, well sustaining the performance.

And so it goes. Disc five contains three sonatas, Nos. 5, 6, and 7, under the
umbrella “Extremes in Collision.” By this Ms. Lim means that these sonatas are
polar opposites, and to prove the point she tends to play up the differences. I
quite liked her interpretations of the slow movements; the Adagio of No. 5, for
instance, is exquisite. And even if her intensity doesn’t do much for me in
some of the outer movements, I appreciate her conviction. Disc six takes us to
the theme of “Resignation and Action,” containing Sonatas Nos. 16, 17
“Tempest,” 18, and 28. The “however” continues to be that
while she is undoubtedly an exciting pianist to listen to, she seems not to
capture fully the introspective moments of, say, the Adagio of the “Tempest” with the same deep emotion of a Brendel,
Kempff, or Perahia.

Disc seven Ms. Lim calls “Eternal Feminine - Maturity,”
reflecting back on the earlier “Eternal Feminine - Youth” theme, now from
Beethoven’s older perspective and containing Sonatas Nos. 24, 27, 30, and 31. Then, the set closes with the category “Destiny” and includes
two of the composer’s most-popular sonatas, No.
8 “Pathetique” and No. 23
“Appasionata,” along with Nos. 12 and
32. It’s as though she were saving
the best for last, and certainly she does up the two named sonatas in fine,
fervent style, with yet much hushed confidence in the slower segments.

In the end, I’d say that for anyone interested in a
one-and-only, possibly first-time purchase of a complete set Beethoven piano
sonatas, Brendel or any favorite pianist from those at the top of the review
might be a safer bet than Ms. Lim’s EMI set. This is not to say, however, that
one should not hear or sample or possibly own one of the single discs from
Lim’s set; nor should one avoid Lim’s complete set as a second or third or
alternative choice in one’s collection. There is no denying her playing is
brilliant and blazing, her interpretations vital, and EMI’s sound clear and
natural. It’s just that Ms. Lim’s performances may be too highly personal as
one’s only realizations of these works.